skip to main | skip to sidebar

Posted by Gordon at 3:53 PM No comments:

Furlough from the Maze! 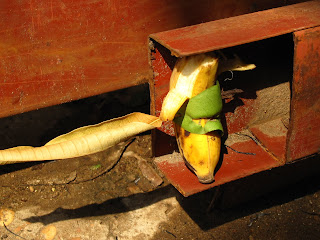 Last night, the second of a saucy weekend, Papa Bear and I went to the Mine Action Group party to mingle with macho. Credit where credit is due, those men are men, and they spIurge on good booze to boot. I partook a few nice fingers of JD and Havana Club, Añejo Especial, and learned a sweet lesson: Good liquor is a lovely way to get drunk if you can manage it. No hooch for me, thanks, even if they do brew it here. The truth is I'm no longer interested in discovering my surroundings, I'm biding time instead, making rent ‘til I can rejoin the brightest shining star I've known and the mom who made her possible. This begs the question: upon which prize to affix my gaze? The bright corridor of Now, or the sweet glaze of Memory?

Lately it's the latter – Life as a by-product of Waiting. Friendships have developed, Life has transpired and taught as she will in any bleak case, but I have dared not enter, and tasted not of the Unknown. I am a dog on a leash, content at least, to go back and forth from office to home to restaurant to dance, all with my own tribe, fearing the forest of shamans around us, dense as it is, and black.

On cue, this Sunday I explored the other side, for the fresh air of it all. The whole day was blanketed with cooling clouds, and the grey gold dust of late afternoon called me from this slumber, to venture outside the compound, on two feet for a change.

And I felt right at home, more than I have since I entered the padded maze 8 months ago. No aluminum containers or air conditioning on the back roads, just tukols behind woven bamboo fences, and people, mostly curious and respectful as I passed.

The golden haze of dusk made the whole scene immediately nostalgic. As I walked along in the idyllic silence understanding the trash, I came upon a hulking truck carcass from the 50’s, mottled yellow and rusty, with the faded inscription on the door, “Gift of the people of – OXFAM.”

Rivulets of sewage and strewn trash did not obstruct my view of the gnarled, rocky street. I could see that this part of was a close cry to its pristine Earth-self – not much concrete even, except for a patioed one-storey corner store here and there. I realized how little trash there was, considering rubbish disposal is virtually non-existent. We disappear our trash, clean and patriotic we are, consuming, forgetting, consuming, forgetting.

Asphalt and rubbish disposal have their place, and their repercussions.

Posted by Gordon at 3:39 PM No comments:

Craving something sweet today with not much in the house - toast and nutella used to be the old sure-fire - now though, thanks to Sudan's heat or a wiser gullet, bread and chocolate don't move me like they used to.

So the lovely Papaya beckoned. Lots you can do with a papaya: cubed with avocado, blended with banana, sliced with salt and lime...but straight up, maybe with a squeeze of lime, when the papaya is at its peak, is heaven.

Alas, today heaven was not on the ground floor. Our papaya, attractive is she was, was not quite ripe. Hmmm...what can we do to make this baby ripe and delicious - now?

Yes, in search of the proverbial shortcut to heaven.

Found it in my kitchen this afternoon, and it is a stairway of sorts. Just one flight of fancy away. 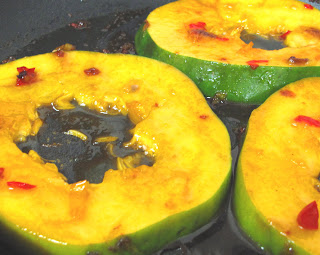 Yes, certainly. What's in the house?

Heat the oil in skillet over medium heat, mixing in diced chiles while they sizzle for 1/2 minute.
Sprinkle brown sugar and pinch of salt across pan evenly. At point of caramelization, place 3 papaya slabs on pan. Sautee on med-high flame, without breaking papaya rings, about 2 1/2 minutes each side, until nicely cooked and syrupy.

Serve in all its juices with a squeeze of lime.

A little reminder that even if it may be hiding, Heaven is in the house.
Posted by Gordon at 8:06 AM 1 comment: 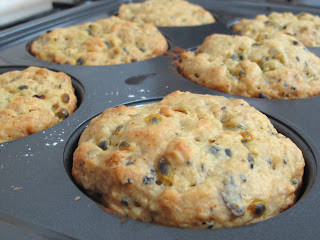 6 medium passionfruit (to mix in afterward)

Watch closely near finish - as crown and garnish become golden brown, insert toothpick to check for moist crumb or no crumb. Cool ten minutes and dive in. 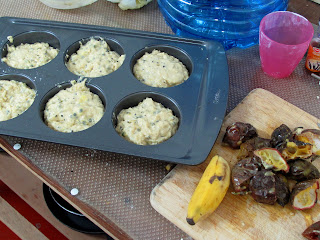 Posted by Gordon at 8:26 AM No comments:

And now, for something completely different...

So the other day I was wandering through JIT, suffering a bout of spiritual diseqilibrium, and you wouldn't believe who I ran into in the chocolate aisle...

Gehlek Rimpoche, esteemed Tibetan Lama and teacher, was stuck on the spot exactly between the Lindt White Chocolate Supreme, and the Deep Dark Extraordinaire. I approached, and as if remembering his role, Rimpoche quietly turned, looking somewhere between me and the floor, to say,

"Appearances of love or pleasure from without, with their abrupt or unsatisfying conclusions, merely mirror Truth, that satisfaction can only be found within...

Completely loving yourself – as opposed to seeking out love – is the most certain path.

Love is not obsequious tribute to all else, but the singular power you wield to accept and understand everything that is You. “You” do not exist apart from your context. You are your context.

Completely loving, or completely knowing yourself, means first accepting, then understanding with diligent effort, everything about “you”: your place, your work, the people around you, the food you eat, your family, your conundrum...

Faith is the seed, but without the willingness to actively understand your context, her fruits cannot ripen."

That last part jolted me - Passionfruit Muffins! And only two hours before brunch!

Hurrying for the flour, I thanked Gehlek and offered my own sage advice: 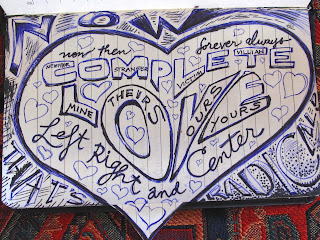 Posted by Gordon at 3:37 AM No comments: 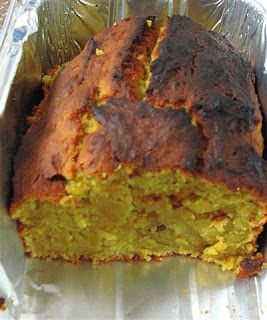 Sift flour, baking powder, ginger and cinnamon and set aside.

Watch closely near finish, as crown and garnish become golden brown. Insert toothpick to check for moist crumb or no crumb.

Posted by Gordon at 5:00 PM No comments:

Peace is the Hard Part

Peace is the hard part.

ñ
(this is supposed to be an arrow)

When I see a shiny brand new Hummer crawling over potholes in Juba, I am confused and slightly sickened (similar to how I feel seeing them in New York City). But the Hummer is obviously one man’s answer to this question mark.

There appears to be a sense among many Southern Sudanese ‘elite’ that the war is over and they have earned their place in some royal constellation – that they’ve "arrived." My exposure to the internal political discourse is limited, but I do read the local press, and sense that not much preparation is being made for lasting peace.

Weapons are being stockpiled as we speak, and despite all smiles for the recent Abyei ICC ruling, the issue of the ‘outlying’ oilfields is very much unsettled as far as the South is concerned. For any talk of clear sailing through elections and referenda, a more likely scenario is escalating inter-tribal violence, leading to yet another civil war. This time, the sad irony is that the civil war would happen completely inside the borders of Southern Sudan, the world’s newest country. The ruling Dinka are resented by much of the rest of the population, and the murmurs suggest that the tribe will be routed as the first course of action for the nascent state.

So what can any of us do to avert this painful and unnecessary catastrophe? 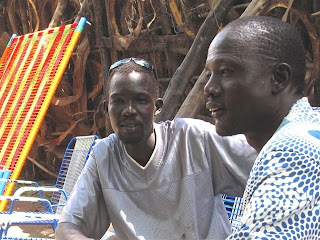 Take these two examples, which scientifically show the power of intention to change our reality:

Reduced Violent Crime in Washington, D.C.
A National Demonstration Project of Transcendental Meditation (TM) conducted in Washington, D.C. from June 7 to July 30, 1993, tested the efficacy of a peace-creating group for reducing crime as measured by FBI Uniform Crime Statistics. Soon after the start of the study, and during a near-record summer heat wave, violent crime began decreasing and continued to drop until the end of the experiment (maximum decrease 23.6%),after which it began to rise again. The likelihood that this result could be attributed to chance variation in crime levels was less than two parts per billion (p < .000000002). The drop in crime could not be attributed to other possible causes, including prior causative factors, temperature, precipitation, weekends, and police and community anti-crime activities (Social Indicators Research 47: 153-201, 1999).

For much more on this topic, see http://www.invincibledefense.org/research.html

And although controversial, Masaru Emoto’s work around the effect of resonance (prayer, music, words) in ice crystals is inspiring and worth a look:

An experiment tested the hypothesis that water exposed to distant intentions affects the aesthetic rating of ice crystals formed from that water. Over three days, 1,900 people in Austria and Germany focused their intentions towards water samples located inside an electromagnetically shielded room in California. Water samples located near the target water, but unknown to the people providing intentions, acted as "proximal" controls. Other samples located outside the shielded room acted as distant controls. Ice drops formed from samples of water in the different treatment conditions were photographed by a technician, each image was assessed for aesthetic beauty by over 2,500 independent judges, and the resulting data were analyzed, all by individuals blind with respect to the underlying treatment conditions. Results suggested that crystal images in the intentionally treated condition were rated as aesthetically more beautiful than proximal control crystals (p = 0.03, one-tailed). This outcome replicates the results of an earlier pilot test.

For example, this crystal was formed from the word "happiness" 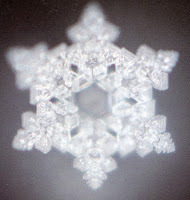 And this one, conversely, from the word, "despair" 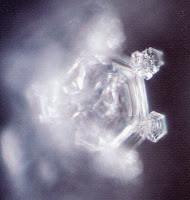 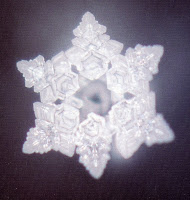 This one from "You did it wrong!" 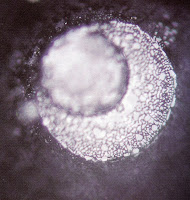 The above studies support my own belief that our intention is truly powerful and the guiding force of our life. Collective intention is exponentially more powerful as we see in the Washington study. So how does this jibe with the culture of silent dissent and verbal acquiescence in Southern Sudan (or anywhere, for that matter)? Mixed intentions and mixed messages inevitably lead to mixed results.

I recently spoke to a Sudanese friend of mine who is an up and coming functionary within SPLM’s ranks. Even though he ‘gets it’ – the need to thoughtfully and confidently challenge authority, to demand and create solutions, to take responsibility and quit the addiction to violence – he cannot say no or express dissent to his superiors. Otherwise he believes he will not move up the ladder, so his strategy is an old one: say yes until you arrive in a place of power, then…if your will for moving in a challenging direction hasn’t atrophied entirely, use your hard-earned position for the greater good.

Ironically this friend told me that Southern Sudanese in power are more likely to listen to khawaja (foreigners/white people) than to wise young Sudanese. He and his girlfriend said that the place to challenge the status quo is not the office, but rather, the dinner table.

So what does it take to sow the mustard seed of revolution (or better still – evolution)?

The hell with arms… I say: take up fork and knife!

Let us all make it so:

"Bless this Meal. Our intention is to understand and be understood; to satisfy our interests without encroaching on the interests of others; to serve a common vision without letting individual fear prevent the greatness that awaits us. Amen."

For a flash I imagined writing a development project around the idea: sponsoring meals throughout Sudan, whose intention is, simply, Good Conversation.

But maybe, no foreign-funded bright idea is required. Maybe, if we say it is so, the mustard seed can take root here.

Posted by Gordon at 1:15 PM No comments: